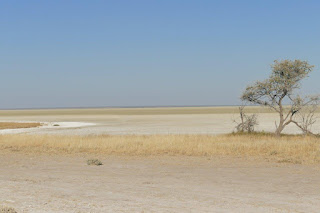 The Etosha National Park in the northern parts of Namibia, 150km south of the border with Angola, covers an area of more than 22,000 square kilometers, larger than the Kruger National Park in South Africa. About 25% of the park is the huge Etosha Pan, originally a lake fed by the Kunene River. Over thousands of years the course of the river changed, leaving a pan in the form of a large dusty depression of salt and clay which fills only temporarily during heavy summer rains. This temporary water attracts thousands of wading and migratory birds such as flamingos and white pelicans. The perennial springs along the edges of the Etosha Pan also draw large concentrations of wildlife and birds. With dimensions of more than 100 kilometers in length and half that in width, the largest salt pan in Africa is a visible landmark from outer space!
History of Etosha National Park
The early European explorers and traders discovered the Etosha area in the 1850s when Charles Anderson and Francis Galton visited it. Relentless hunting of the area’s game ensued until 1907 when Dr von Lindequist, then the governor of German South West Africa, proclaimed three reserves to protect the land and seasonal migrations. These boundaries held until the 1960s when Etosha National Park was shrunk to its present size. 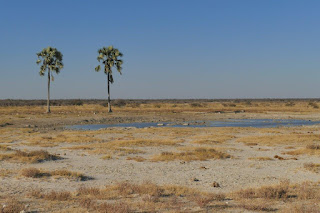 The rest of the national park, away from the pan, is flat terrain with a variety of habitats ranging from mopane woodland to wide, open grassland plains with very few trees. In the east of the park, around Namutoni, the attractive Makalani Palms are found, often in picturesque groups around waterholes. 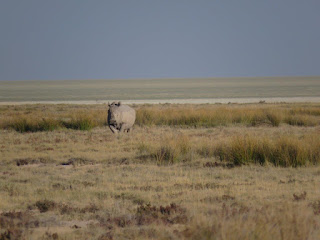 It is the bush and grasslands surrounding the pan that provide habitat for 114 mammal species, 340 bird species, 110 reptile species, and 16 amphibian species. These include large numbers of zebra, springbok, blue wildebeest, oryx (gemsbok), eland, elephants, lions, leopards, and to our surprise, giraffe. Black rhino, one of the rare species, also thrive here. 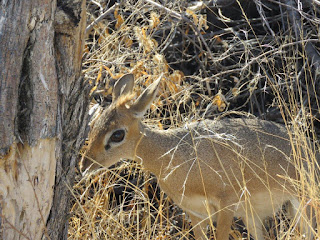 Black-faced impala are one of the rarest animals in the region, while the unusual Damara dik-dik is the park’s smallest antelope.

All of the larger felines are found in Etosha, with good numbers of lion, leopard, cheetah and caracal. Also found in the park are both spotted and brown hyenas, silver jackal (or cape fox), and the more common black-backed jackal – many of which can be seen in the late evening, skulking around the camps in search of scraps of food. 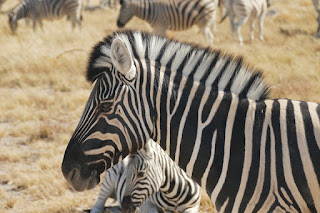 Birding is probably best during the rainy season (January to March). After good rains the salt pan fills with water attracting huge flocks of flamingos, white pelicans and even blue cranes. The world’s largest bird, the ostrich, and the heaviest flying bird, the kori bustard, are common sightings. Fairly common amongst the birds of prey are bateleur, martial, tawny and Wahlberg’s eagles, black-breasted and brown snake eagles. Lappet-faced and white-backed vultures are also common here, outnumbering the odd pair of white-headed or hooded vultures.
When and why Ramsar
Etosha Pan and its associated smaller pans, about 25% of the area inside the Etosha National Park, was designated as a Ramsar wetland on 19 June 1995. This unique, vast landscape is of international importance due to the biological diversity of the pans and its surrounds. The parks supports populations of several rare and endangered large mammals such as black rhinoceros, African elephants and roan antelope. The pan also serves as a breeding ground for flamingos in good rainy seasons.
Tourism
Game and bird viewing, as well as photography, will be the most important reasons why Etosha is one of the most popular attractions in Namibia. The game viewing in Etosha National Park is excellent, the best time being from May to September - the cooler and drier months in Namibia.
Most visitors are self-drive overlanders, or tourist operators with big 4x4 trucks. Roads inside the park are good gravel roads, accessible by most sedan vehicles - the exception may be during the rainy season when slippery roads may require more suited vehicles. 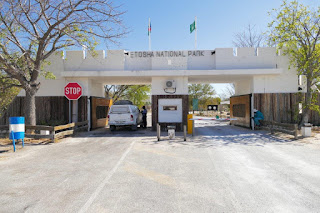 Etosha National Park can be entered via the 3 main gates: Von Lindequist Gate (near Namutoni rest camp) west of Tsumeb; King Nehale Gate southeast of Ondangwa; and Anderson Gate (near Okaukuejo rest camp), north of Outjo. The park has three main rest camps that connect Anderson Gate in the south with Von Lindequist Gate in the east. These camps offer a range of self-catering accommodation options from chalets to campsites. Swimming pools, restaurants, convenient shops, fuel stations and floodlit waterholes are standard facilities at all 3 camps. 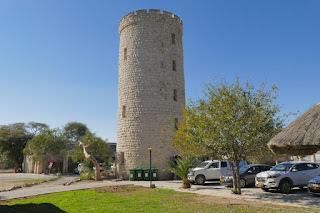 Okaukuejo is famous for its floodlit water hole where rhino and elephant are regularly seen side by side. Etosha’s busiest camp offers chalets with views of the waterhole and is structured around a tall stone tower.
Halali is centrally located in the park within close proximity of some of the most popular waterholes. The waterhole at Halali has the reputation of attracting leopard, especially at night time. The camp has the largest swimming pool in the park. 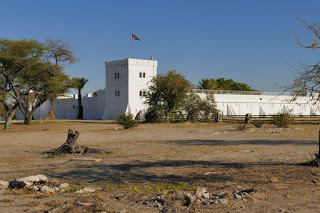 Namotoni is a former German fort. The tall white protective walls of the fort give this camp a unique personality.
Situated deeper in the park are two exclusive, luxury camps – Dolomite and Onkhoshi. At Dolomite Camp in the western parts of the park, guests are accommodated in permanent luxury tents with an elevated view over the endless plains. Onkoshi Camp with only 15 free standing luxury chalets, has unparalleled views over the eastern Etosha Pan which attract thousands of flamingoes and other waterbirds during the rainy season.
Many guests choose to stay at lodges outside the park boundaries or to use a combination of the privately owned establishments along with a few nights inside the park - allowing them to experience the best of both worlds. Many of these privately owned establishments offer private game drives, either in their own game reserves or in Etosha National Park itself. 4 E.
Special
Etosha National Park is unique in Africa. The park’s main characteristic is a salt pan so large it can be seen from space. Yet there is abundant wildlife that congregates around the waterholes, giving you almost guaranteed game sightings. At the same time Etosha National Park is one of the most accessible game reserves in Namibia and Southern Africa.
The park is malaria free, accessible in a regular sedan car and the rest camps provide a range of accommodation as well as restaurants, viewing decks, shops and fuel stations. Luxurious camps in Etosha’s remote areas have now added top end accommodation to the park’s offerings.