Lets’eng-la-Letsie is Lesotho’s only Ramsar wetland, located in the south-eastern part of the mountain kingdom. It is not easy to reach this piece of paradise high-up in the mountains, as the only two ‘roads’ leading there are rough, tough, adventurous 4x4, and not for the faint hearted. 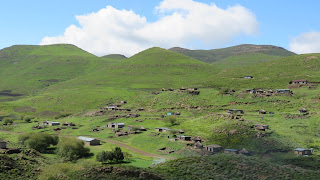 We entered Lesotho from South Africa at the Qacha’s Nek border post, not far from Matatiele in the Eastern Cape. From the border post we traveled further south-west on the A4, a good tar road, to the small village of Mphaki where we met government officials from Lesotho. They arrived with two 4x4 vehicles to escort us up the 22km jeep track leading to Lets’eng-la-Letsie. We passed through beautiful mountainous landscapes, higher and higher, passing several small rural villages and schools. I could not appreciate the natural splendor as I was so focused on (and concerned about) the slippery, rough road with major steep cliffs centimeters from the wheels. And then, eventually, after 90 stressful minutes, we were there: the entrance to Lets’eng-la-Letsie Nature Reserve at an altitude of 2,420m with the man made dam about a kilometer further down the valley. The reserve’s fences and sign boards were removed by vandalism - or poor people needing equipment.

It was sunny with a few clouds in the air. The grass around the dam was green. A feast for your eyes and definitely paradise for the cattle, sheep, horses and donkeys that were grazing there. Exactly the biggest challenge for management of this reserve and Ramsar wetland, but more about that later. 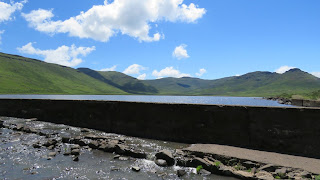 The road inside the reserve goes past the shallow dam and then follow the flat wetland all along the mountains up to the reserve’s boundary 12km further south. Several streams come together on the flats and flow towards the dam through the wetland.

Over 800ha (approximately 20%) of the Lets’eng-la-Letsie catchment is considered to be a type of wetland. These wetlands are important as they filter the source of the Mohlakeng River, a major tributary of the Quthing River, which in turn is one of the major tributaries of the Senqu River, which eventually becomes the Orange River in South Africa. Just over half of these wetlands (434ha) in the catchment area have been declared as Lesotho’s only Ramsar site. 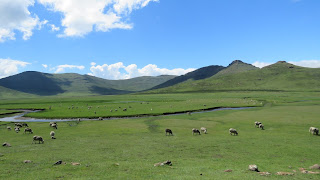 The climate here at Lets’eng-la-Letsie is strongly seasonal, with summer temperatures reaching 26°C or higher in January and winter temperatures drop to -5°C or lower. Average rainfall is around 800mm per annum of which more than 80% occurs during summer between the months October to March. Frequent snowfall is common during winter.


When and why Ramsar
The wetlands at Lets’eng-la-Letsie are a representation of less disturbed high altitude wetlands in Lesotho. Seven bird species which are described as threatened, are supported by these wetlands. These include Cape vulture, Bald ibis, Wattled crane, Blue crane, Lesser kestrel, Black harrier and Yellow-breasted pipit.
This, as well as the considerable biodiversity value of the catchment area were part of the criteria when the wetlands were declared of international importance on 7 January 2004.
Fauna & Flora 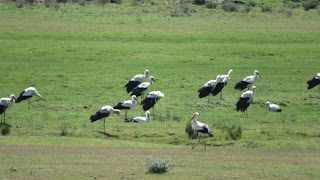 As mentioned earlier, we saw a large number of cattle, sheep, donkeys, goats and horses in the reserve. This may be the reason that there were no wild animals to be seen. But there are many birds, especially White Stork and the vulnerable Southern Bald Ibis. More than 100 bird species have been recorded including Wattled and Blue Cranes and the Lesser Kestrel.
Threats
Poverty and unemployment in the areas around Lets’eng-la-Letsie catchment are high. These communities depend largely on resource harvesting and subsistence farming to meet their livelihood needs. Livestock such as goats, sheep, cattle, donkeys and horses are also an important livelihood strategy.

Lets’eng-la-Letsie catchment is currently used as grazing land and is important for provision of grass for thatching, as a source of water, medicinal plants and wood, and for fishing. Given the free access and open property nature of the site, it suffers from overstocking, overgrazing and erosion, as well as over exploitation of its natural resources.
Several methods to improve the sustainability of the use and management of the wetland areas, have been tried in the past but have had little success. The communities recognise that the decline in the condition of the catchments is having a negative impact on their livelihoods. Local solutions proposed to address this degradation include the introduction of rotational grazing systems and controlled use and improved protection of resources. It is evident that local communities are aware of some of the key management solutions and interventions required to improve the management of the Lets’eng-la-Letsie catchment. However, to date there is no change in use patterns and the catchment continues to degrade.
It is clear that the biggest challenge to preserve and wisely use this Ramsar wetland, is to manage the access and grazing.
Tourism
There are no facilities available for tourists visiting the area. Fishing is also not allowed in the dam or streams running through the reserve. The only attractions other than the natural splendor of the area, are the challenging roads to the north and south of Lest’eng-la-Letsie. Offroad enthusiasts with motorbikes, quadbikes and 4x4 vehicles do travel here. It was sad to see the wheel tracks that some of these visitors left on the precious and sensitive environment.
Lets’eng-la-Letsie is a natural tourism resource with great potential that could be incorporated into the proposed Maseru to Matatiele tour route. It will require that the access roads to Lets’eng-la-Letsie via Ongeluk’s Nek and Mphaki be upgraded to good, all weather, safer roads. Concept plans are being drafted and considered by the Lesotho authorities to do this, which could lead to the development of other tourist opportunities such as overnight accommodation, a wide range of hiking trails, outdoor adventure routes, environmentally sensitive off-road trails, Basotho pony trekking, mountain biking, fishing, adrenalin sports and snow skiing.
Special
We reached the reserve’s southern boundary and I could see on my GPS that we were only 6km from the Ongeluk’s Nek border post to South Africa. But we had to turn around as the officials told us that the road to Ongeluk’s Nek (Maphooaneng Pass) is much worse than the road from Mphaki that we used to get to Lets’eng-la-Letsie. After witnessing how relaxed they were driving so far, I had no reason to doubt their judgement. 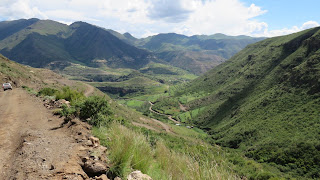 On our way back we followed a different route towards Tele Bridge border post. The road was recently upgraded and although it is a gravel road, it is in a very good condition, accessible by most sedan vehicles. Be careful for some hairpin bends with no rails. It is a very scenic road, following the Quthing river until it becomes the Senqu river. There are major opportunities to establish picnic and/or accommodation sites along this route. 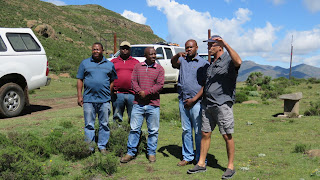 Our visit to Lets’eng-la-Letsie coincided with a public holiday in Lesotho – Moshoeshoe Day, one of the most important holidays. Seeing that it was on a Friday, it was a long-weekend. Despite this, Mr Fanana and 4 of his colleagues sacrificed the whole day to accompany us. They are very proud and keen to show us their beautiful country. I salute your commitment!